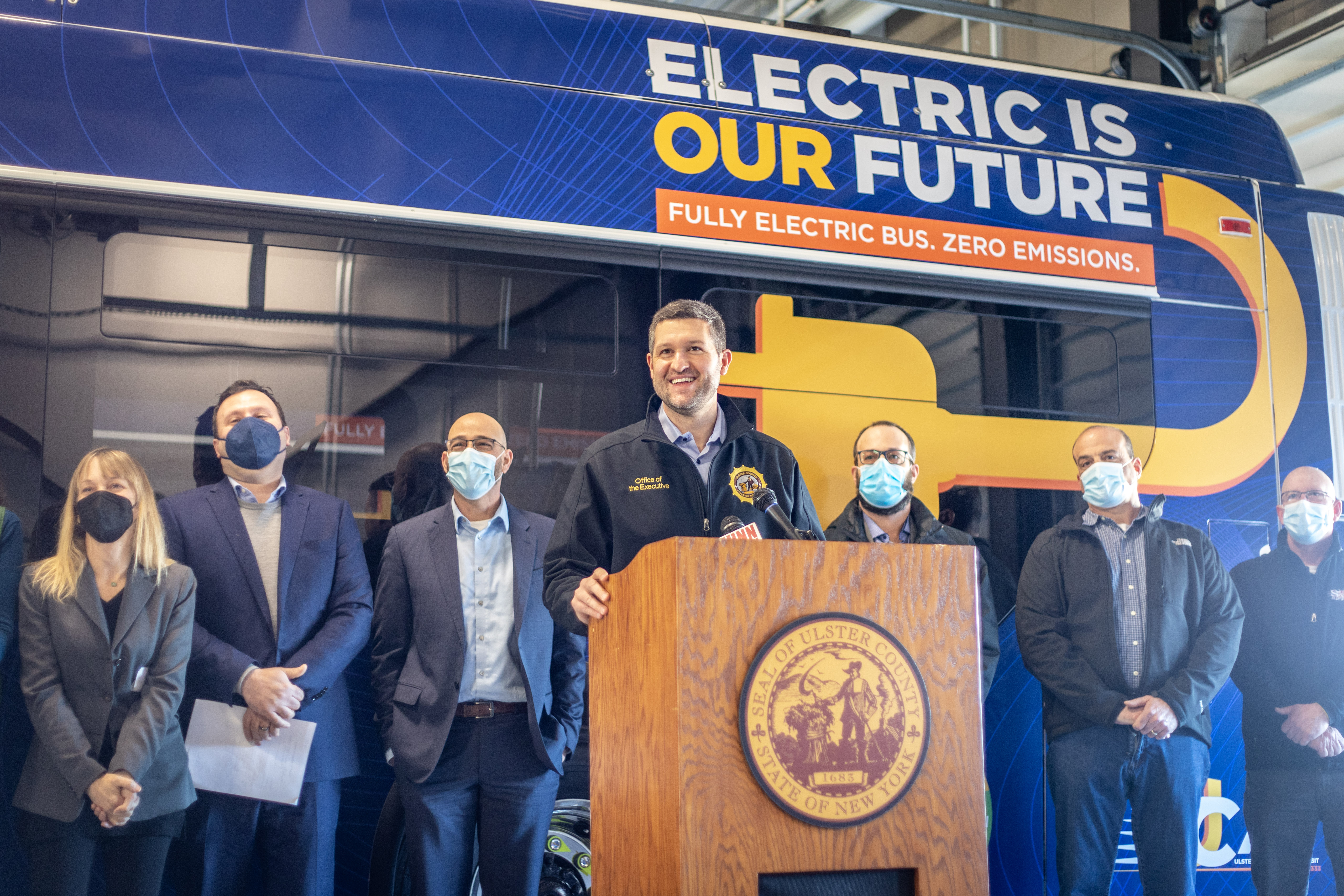 KINGSTON, N.Y. – Ulster County Executive Pat Ryan announced today that Ulster County Area Transit (UCAT) has put its first three electric buses on the road. The buses will run on 100% renewable electricity and reduce transit-related greenhouse gas emissions by an estimated 10% (112 metric tons of CO2e per year). County Executive Ryan and the Ulster County Legislature are making major progress towards the County’s aggressive Green Fleet policy goal of 20% green by 2025: the addition of these three electric buses brings the number of green vehicles in Ulster County’s fleet to approximately 9%. As UCAT buses near the end of their useful life, they will be replaced, and nine more buses are scheduled to be replaced with electric buses in the coming years.

“Putting electric buses on the road is an essential part of implementing our Green New Deal in Ulster County,” County Executive Pat Ryan said. “Not only are we the first county in the nation to develop our own localized Green New Deal plan, but we are also taking aggressive action to implement our plan and protect our environment. Here in Ulster County, we are showing that bold climate action is not only the morally right thing to do, but that it will also position our community as an economic leader in New York State and across the nation.”

“NYSERDA commends Ulster County’s leadership and commitment demonstrated by the addition of not one, not two, but three electric buses with a plan for adding more to their fleet in the years ahead,” Doreen M. Harris President and CEO of NYSERDA said. “We are proud to support their efforts to implement clean transportation which will make a big difference to the community with reduced pollution and emissions and an eco-friendly, accessible, and comfortable ride for passengers.”

The New York Power Authority (NYPA) provided the charging infrastructure and coordinated with the Department of Environmental Conservation (DEC) for the use of Volkswagen settlement funding. Additionally, the UCAT depot was equipped with wiring upgrades to allow for expanded charging in the future and the development of renewable energy technologies.

In September 2020, County Executive Ryan and then Senator Jen Metzger announced that Ulster County was receiving $100,000 from a State and Municipal Facilities Capital (SAM) program grant, which funded a 30kw solar array that was installed on the roof of the UCAT transit facility to power the facility and charging infrastructure for electric buses.

The electric buses now on the roads of Ulster County are wrapped with the message, “Electric is Our Future.” UCAT bus rides range from free for children, SUNY Ulster students and veterans, to $2 for outside Ulster County adults. Schedules can be found online at http://ucat.ulstercountyny.gov/routes/.